Successful launch event for First World War Centenary Series at Flanders House London
On 14 May, the Centenary Series at Flanders House were launched. In the up and coming period of First World War commemorations, Flanders House wants to act as a “Centenary Hub” in London, a base where WWI-related activities are organised (diplomatic, academic, economic, cultural, tourist,…), information is circulated and networking takes place on a regular basis.
The launch event was set up in partnership with Visit Flanders. It featured presentations of the Representative of the Government of Flanders as well as the Director of Visit Flanders. Additional speakers were Erwin Mortier who talked about the GoneWest programme, Christophe Declercq who discussed the topic of Belgian refugees in the United Kingdom during the war and Annelies Beck who read excerpts from her book Across The Channel, about a Belgian refugee in Glasgow. To conclude Paul Rans talked about the Passchendaele Peace Concerts and sang a song from these concerts a cappella. The programme itself was presented by Lieven Vandenhaute of VRT. 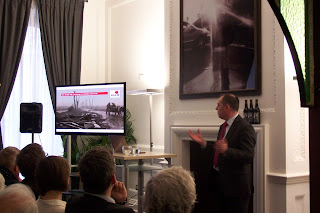 A calendar with all our events is soon to be published on our website, starting in September with a first event. During the next four years several other events in this First World War Centenary Series will take place at Flanders House.
Posted by Christophe Declercq at 02:45