Like in 1914, Europe is facing a dramatic refugee crisis right now. Although it is difficult to draw many parallels, the history of the Belgian refugees in Britain during the First World War does bear some relevance to today.

Huge numbers of Belgians fled their country at the outbreak of World War One. Younger and older people, men and women, the poor and the rich, townspeople as well as country folk, all thronged into roads, stations and ports with the same aim: to flee from the rapidly advancing German troops. By the end of the war, about a quarter of a million refugees will have lived in the United Kingdom for some time, with about 165,000 being resident for the entire period.

Amsab-ISG, the Institute of Social History (University of Ghent) is currently working on a project on Belgian refugees in Britain 1914-1918 that will lead into a virtual exhibition in February 2017 (in English and Dutch). In the meantime, the project aims to find the the untold stories of Belgian men, women and children who lived and worked in the UK during World War One but also of those British people who helped and accommodated them.


The Red Star Line Museum, Antwerp, and the Amsab Institute for Social History, Ghent (Belgium), have joined forces for a shared event at the Red Star Line Museum in Antwerp on Sunday 15 November, 1-5pm, whereby family histories can be recounted and iconographical material (pictures, drawings, lettes, diaries, leaflets...) can be digitised. Read more about it here.

At either event, people who have Belgian ancestors or who have ancestors who hosted Belgian refugees during the war, are invited to come and recollect together with a few specialists on the subject. Through these collection days, Amsab ISH hopes to uncover more family stories from the time but also pictures, drawings and other significant material. 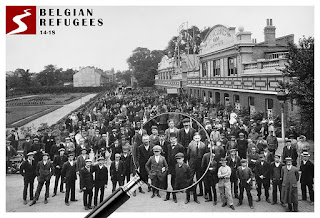 Other than Red Star Line Museum and the People's History Museum, the project has many more partners, in Belgium as well as in the UK, you can these here.

Posted by Christophe Declercq at 14:13