Below is a reproduction of a text produced by the people of Wales for Peace and Christophe Declercq on the subject of Belgian refugees in Wales. On 17th of February, at 6pm, in the Main Hall of Aberystwyth University’s International Politics Department, the public and academics alike are invited to explore a less-studied aspect of WW1, namely the astonishing achievement of hosting around 250,000 Belgian refugees in the UK.

When Germany invaded Belgium on 4 August 1914, Britain declared war on Germany. The following weeks fierce fighting across Belgian territory created a mass movement of civilians, which came to a halt with the fall of Ostend (15 October) and the First Battle of Ypres (19 October – 22 November). In fact, in the early autumn of 1914 nearly one in three Belgians sought refuge from the war.

In early October alone, nearly one million Belgians crossed the border with the Netherlands. By the end of 1914, nearly 100,000 Belgians had crossed the Channel. Six months later, this number had grown to about 175,000. In total, during the course of the war, over a quarter of a million Belgians had visited Britain, although there were never more than 165,000 in Britain at any one time.

The sojourn in Britain of about a quarter of a million Belgians has long been overlooked. The reasons for this are many. Most importantly, the Belgians came as imperceptibly as they went. By mid-1919 virtually all had returned to Belgium, without leaving a clear trace. During their stay in Britain the Belgians disappeared from view. Initially the ‘Belgian refugee’ was a very useful image in maintaining popular support for the war cause.

Yet as the war dragged on the ‘Belgian refugee’ needed more than reception, accommodation and subsidized support, consequently across Britain tens of thousands of Belgians were gradually employed in the war industry. Sometimes this led to the development of a true Belgian colony around a particular factory (Elisabethville near Newcastle, Pelabon in Twickenham/Richmond and Kryn&Lahy in Letchworth, for instance). Thousands of Belgian children went to entirely Belgian schools established in Britain especially for that purpose, and even more attended British schools. The Belgians also relied on an intricate spread of exile newspapers and journals. In short, by mid-1915, Belgians disappeared from view into the factories and schools and they were reported on mainly in their own newspapers. 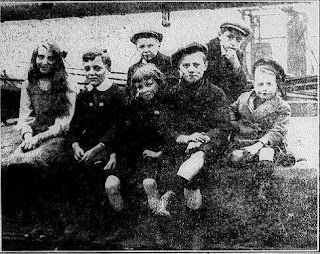 Although one in three Belgians stayed in the greater London area, thousands of Belgians found a safe haven in Wales too. By the end of August 1917, a total of 4,547 Belgians were still living in Wales (compared with 155,376 in England, 10,628 in Scotland and 1,700 in Ireland). Two small local Belgian communities of about 500 Belgians each were living in Cardiff and Swansea. More than a thousand Belgians stayed in Pembrokeshire, an area on the outskirts of the main island that not only had century-old ties with Flanders, but also a fishing industry to which the mainly Flemish settlers could relate (Milford Haven). Early on in the conflict, the Davies sisters arranged for a number of Belgian artists to be brought to Wales. Eventually, nearly a hundred were accommodated, most of them in and around Aberystwyth.

History repeats itself. When the Germans invaded Belgium again in 1940, thousands of Belgians came to Britain once again, including Wales. The Belgian government in exile subsequently established a military camp in Tenby, for instance, a seaside town where Belgians had lived during the First World War as well.

An exciting part of the Wales for Peace project is mapping out the impact of war and peace heritage throughout Wales. With the help of volunteers across Wales and in partnership with the National Library of Wales and People’s Collection Wales, we are interested in uncovering local histories and archives relating to the Welsh-Belgian experience during WW1. The Belgian research project provides an opportunity to extend the partnership to share discoveries digitally and inform and inspire future actions relating to the reception of refugees and the strengthening of Wales-Belgium links.

On the subject and the event Christophe said: "Reflecting on the past to illuminate the present is what history is all about. This Belgian-Wales sharing of information will enhance our understanding of the Belgian Refugees' story during WW1, in the context of a new refugee crisis emerging in Europe a 100 years later. I was very pleased to respond to this opportunity to share my research through the Wales for Peace project, at Aberystwyth University’s International Politics Department."

*Christophe Declercq has been researching the Belgian refugees story for over a decade and has not only addressed conferences on the subject, but also local communities. He has been involved in various Centenary projects and is the UK liaison officer for a project currently organized by the Amsab Institute of Social History (affiliated to the University of Ghent, Belgium): www.belgianrefugees14-18.be. The project is supported by renowned partners in both Belgium and the UK, such as the In Flanders Fields Museum (Ypres), the Red Star Line Museum (Antwerp), the People’s History Museum (Manchester), the Imperial War Museum London and Hertfordshire at War, among others. Amsab-ISG is looking for archive material for an online exhibition on Belgian refugees in Britain during the First World War, in particular iconographic material (pictures, drawings, letters, leaflets, concert programmes etc.) and family histories from those who have a Belgian ancestor, as well as from those whose families accommodated Belgians at the time. The project has many public engagement events and is now expanding into Wales and relevant Welsh history. The project does not focus entirely on the past and aims to include a contemporary education component as well as references to the situation of refugees today.

Working with Wales for Peace www.walesforpeace.org and People’s Collection Wales http://www.peoplescollection.wales which provides training and resources, archive collections can now be scanned locally and shared digitally with both the Welsh and Belgian historians and public.
Download a hidden history initial contact form to progress with your community/school research idea.
Posted by Christophe Declercq at 07:40