Belgian Jews in the UK

There is no comprehensive history of Belgium's Jewish community and its experience during the First World War yet. Throughout the Centenary some output became available, but even the 'smaller' story of Belgian Jews who fled to the UK has hardly been covered.

Although Peter Cahalan and Michaël Amara do take on board the plight of the Jewish fleeing from Belgium - the story of their exile in the Netherlands is of a bigger scope than that in the UK - a first article on the subject was by Janiv Stamberger.

Figures on the number of Jewish Belgians remain unclear, estimates vary between 5,000 to 8,000. One clearer figure spoke of 3,000-3,500 by 1916. The Jews Temporary Shelter (Leman Street), the Manchester Hotel (Aldersgate) and a disused warehouse on Soho's Poland Street were among the locations where Jewish Belgians were accommodated. By the end of 1915 over 600 people stayed in the Manchester Hotel and quite a few of them - it is not clear whether this applied to all - were distributed over 35 houses in North London (Amara 2008:177).

Although a National War Refugee Committee was established to deal with the refugee situation, the Jewish community took it upon itself to provide shelter and food for this influx of Jews. The London Beth Din was very active "in ministering to the religious needs of Jewish refugees from Belgium and in assisting them in finding employment".

More on Belgian Jewish refugees in the UK here.

Posted by Christophe Declercq at 00:40 No comments:

"Ten months ago, the Belgian Workshop opened at Crosby Hall with 12 to 15 people. Belgian ladies from the Chelsea area wanted to attend this workshop for the well-being of their brave soldiers and for the destitute people of Belgium. There are now at least 320 groups registered in the books of the Workshop, some of which consist of a single small refugee family, living in a remote corner of the province, others of perhaps twenty families meeting weekly in one of Britain's towns to talk about their homeland and to encourage each other to work for it: in all about 1300 individuals. There are also English ladies, perhaps from a local committee, who take part by organising the meetings or distributing the raw materials provided by Crosby Hall. But ours is above all a Belgian work, supported by the refugees themselves. Whether the woman who offers herself for work is a lady from Brussels or a small peasant girl who only speaks 'Vlaamsch', as long as she is honest and willing, we send her wool to knit socks or a shirt to sew." 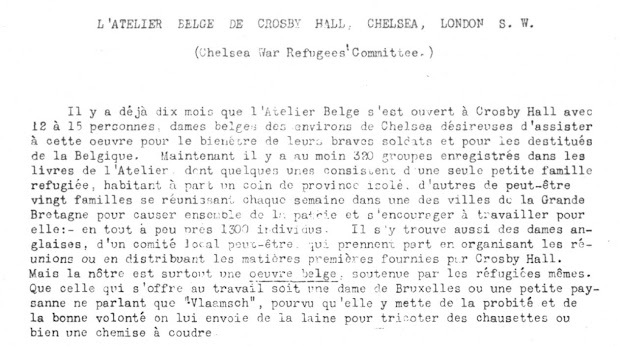 Posted by Christophe Declercq at 02:22 No comments:

The following is not in honour of the new Speaker of the House, but any occasion is good enough to dive into hetarchief.be and briefly tap into the Belgian refugees in Chorley according to that single source. A brief dive though it is.

Notes from a train: Hitchin

On our way to Leeds, our train unexpectedly stopped at Hitchin. Quite fittingly really. You can find a Hitchin Belgian through the database by @FWWBRefugees. Irma, came to England when she was 16 years old. She was accompanied by her mother, Maria Theresia Lodewijk, and her brother Leon. They settled in Letchworth, Hertfordshire in 1914. A munition factory had been established there by two Belgian refugees Jacques Kryn and his brother George. The factory became known as Kryn and Lahy. Mrs Lahy herself lived at Corrie Wood, Hitchin Road, Letchworth. There is a nice story about Maggie Wray, a local young woman who worked at Kryn and Lahy. Irma began working there as a munitionette While working there she met her future husband George Julien Francois Heinen. They were married in Letchworth when she was 19yrs old at the Church of St Hugh of Lincoln, Letchworth. They lived at an unnamed road in Hitchin. freebmd.org has the marriage, Dec 17.

Hitchin has 87 hits at hetarchief.be, although some relate to Lord Robert Cecil's election victory in Dec 18 or to a Hitchins. @viaa_be hetarchief does mention The Belgian Cottages in Ickleford (between Hitchin and Letchworth). At those cottages Mrs Angélique Gonderzeune (from Merksem, Antwerp) lived, with her daughters. The cottages also house Maria Wouters, most likely a sister-in-law. Ickleford also welcomed a French refugee, I. Gonnet, from Paris. Gerard Remes/Herges (Namur - the two spelling variants appeared) stayed with Mrs Ransom at Grove House, Hitchin. Jeannette Devos, from Kumtich (Tienen) was based at 4 Cleveland Terrace, Walsworth, Hitchin. A family Van Doren resided in Hexton, Hitchin.

On 21 October 1915 Jean-Baptiste Moens (born in Brussels 1886), corporal in the Belgian army, was buried in Hitchin. He had been wounded in the siege of Antwerp more than a year prior and had been working at Kryn and Lahy in Letchworth as a convalescent soldier. He had died because of a lung-related illness. (L’Indépendance Belge, 25 October 1915). A mention was made of fellow convalescent soldiers including those from the local Belgian convalescent hospital. On 19 August 1916 Séraphin Balcaen, from Aartrijke, had died in Hitchin because of an unspecified accident.
On 21 February 1916, it became clear funding for Belgians was no longer at the same level it was at the start of the war: an appeal was made for funding so that a group of 10 to 12 year olds could have some more clothes. The children, listed below (note the nameless girl…), were overlooked at St Michael’s School in Hitchin by the Belgian priest Cochet.

On 31 March 1915, an event was held at the Hitchin Gymnasium. Mr. William Baruh, the chairman of the Union Dramatique d’Anvers was talking about “De l’influence des sociétés d’agrément sur l’ésprit artistique de la Belgique”. Entrance was free for Belgians, which makes you wonder whether any non-Belgian even attended. (L’Indépendance Belge, 30 March 1915) The event was covered again one week later by the same Belgian exile newspaper but then it was added that Mr. Baruh thanked the Hitchin Debating Society and that local people would have attended, in part because of the Hitchin Collège Français. After he concluded his talk, Baruh recited two patriotic poems by Emile Verhaeren. 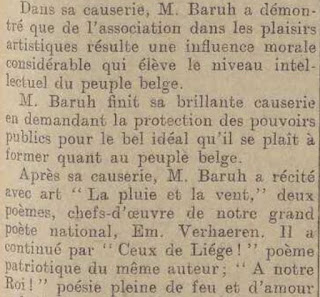 On the 10 April 1915 L’Indépendance announced that the then coming Sunday a very Belgian Te Deum would be performed at the local Catholic church, due to the birthday of King Albert’s, and that the de facto head of the Belgian community in Hitchin, Mr. Vuylsteke, invited all to come, especially those who were open to some religion and patriotism.

There are two paintings of St Mary's Church at Hitchin by Gerard Ceunis (1885-1964). There is a connection between Ceunis and the building that now has the Hitchin Starbucks.

But then again we might as well want to mention that nearby Wheathampstead was established by Belgic tribes in 50 BC. However, do have a look at the Hitchin Roll of Honour and browse using 'Belgium' to get a more accurate imprint of WW1 times.
Posted by Christophe Declercq at 15:00 No comments:

Research into Belgian refugees in Britain - addition to the literature

After a PhD, many chapters, lots of flurrying around projects producing literature lists, lists of resources and the like, the delight of discovering a new source that had been overlooked until now is both pitiful and very exciting at the same time.

Judging from what has been published before the watershed 1977 PhD by Peter Cahalan, published in 1982 (i.e. 1982 was the year of reckoning, no Google Books or downloadable PDF files from McMaster back then), references to Belgian refugees between 1982 and the 1920 Report on the Work Undertaken ... appear to be limited and any reference rather cursory.

In Flanders, one publication that is typically overlooked is Van Isacker's 'Mijn Land in de Kering' (published in 1983 but covering a period up to 1980), even though focus lies more with the refugees as internally displace persons or when in the Netherlands. In Britain, one publication from about the same time, although published between Cahalan's 1977 and 1982 works, is 'Dear Old Blighty' by E.S. Turner in 1980, which contains about ten pages on Belgian refugees. 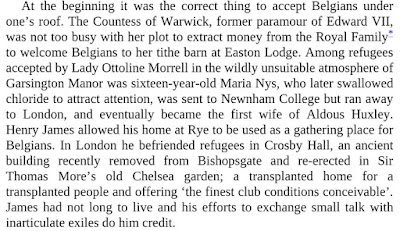 Allow me to draw from the Dreaded W for once (edited though it is): Ernest Sackville (E. S.) Turner (1909-2006 - he passed away at the gentle age of 96) was an English freelance journalist and author who published twenty books, including Boys Will Be Boys (Michael Joseph, 1948), The Phoney War on the Home Front (St. Martin's Press, 1961), and What The Butler Saw (Penguin, 1962). He contributed to the Times Literary Supplement, the London Review of Books, and Punch (the last one for more than 50 years).

The Independent has his obituary still online. There a reference is made to the process of 'Turnerisation': a softening technique to make everything easy and accessible. Another characteristic of Turner's works is "the fascination for the oddities in life, and the lure of the off-beat. You cannot dip into an E.S. Turner book for long without starting to collect fascinating trivia." (Miles Kington)
True, "No matter where you open a page, you learn something you feel you should have known."(Kington again), and this could not be more true than for his 'Dear Old Blighty', not the most exciting of titles today, but maybe it was at the time. Preproduction and writing included, the contract must have been secured in 1979, 40 years ago. 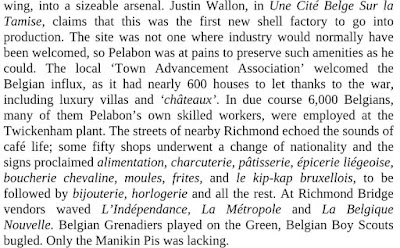 The Dreaded W also has a description of E.S. Turner's oddities that might explain why he disappeared from the radar to a large extent: "In this period between the wars, he added voyages on liners flying under the flags of Nazi Germany and fascist Italy ... and did a motor tour in "swastika-hung" Germany in a Morgan three-wheeled automobile." And yet when "mention is made of political leanings—O'Hagan refers to Turner as "never a left-wing die hard" and as having a "rightwing persona (which was only partly a pose)". During a House of Commons debate on the foxhunting issue, Labour MP Tony Benn quoted from E.S. Turner's Roads to Ruin: A Shocking History of Social Progress (1950), the book where Turner exposed the upper class's "disgraceful rearguard action…" against reforms such as "abolition of child chimney sweeps and the repeal of laws under which convicted criminals could be hung, drawn and quartered." 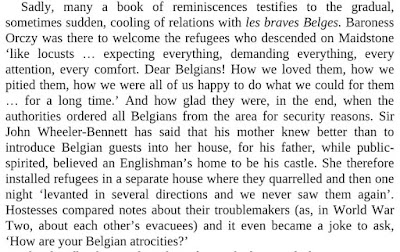 Posted by Christophe Declercq at 12:17 No comments:

The overview below of Centenary commemorations that paid attention to Belgian refugees or were mainly constructed around that piece of civilian First World War history is not an exhaustive one at all. The reference section of a future chapter in the book Refugees in a Moving World: Interdisciplinary Conversations (Elena Fiddian-Qasmiyeh editor) includes a reference to this page. The book is due end of 2019/ early 2020.

Posted by Christophe Declercq at 13:50 No comments: 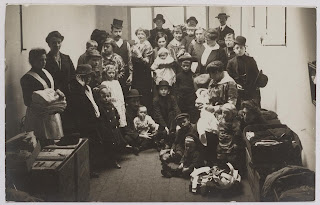