A regular Belgian section in The Glamorgan Gazette

This post is mainly based on The Glamorgan Gazette (via Welsh Newspapers online) of 30 October 1914. The account below provides a useful insight into life in a city that is being shelled, and into the last few days before Antwerp fell on 9 October. One cannot but think of life in Aleppo right now. There are some clear details about the journey from Antwerp to the Netherlands and from there to the United Kingdom, more in particular to Bridgend.

Jacques De Hont, his wife and brother Louis, stayed at the residence of Mr. Laurence in Wyndham Street, Bridgend, when a journalist of The Glamorgan Gazette asked Jacques about his story of  "that week of terrorism which saw Antwerp being vacated by all living souls that were not among the combatants attempting to repel the invader.  In fairly good English he narrated incident after incident that brought to the mind a terrible picture of suffering, anxiety and terror.

I can't describe all I saw; it would be unbelievable unless one had actually gone through the experiences that the people of my city went through. It was beyond description.
For twenty-four years I had lived in Antwerp. Things have altered now. Antwerp, or a great part of it, is in ruins.

My brother and a captain of the Civil Guard and myself then started a walk through the city just as the bombardment commenced. Bombs fell in all parts of the city, and shells overhead were screaming as they tore their way through the air. Some fell in the Rue de Peuple, Avenue du Sud, Chaussee de Malines, and the Rue du Esplanade. Houses were struck till nothing remained but bare walls. The cables of the telegraphs were cut, and fell about the road. Flames sprang up to the sky from those houses where shells had fallen.

As we were going along one street a shell burst behind us with a terrible roar. It had struck a house, and blew everything to pieces inside, and only the walls stood upright. In Rue du Compromis several sheels fell and set a number of houses on fire. At last I reached my office, and was just going in when a shell struck the Madonna Church tower and wrecked it. A man lost his arm, and the captain of the Civil Guard was injured in the kneecap.

Near my house I found my brother and my wife had already left, with thousands of others, who were making their way to the Dutch frontier. We left our home and soon after we saw it fall in a heap of ruins as a shell struck it. Immediately after another hit the hospital. People were rushing along the streets panic stricken and making for safety. As the sun rose at 3 or 4 o'clock in the morning we could so.

Antwerp was in flames; everywhere there was fire, and the sky was lit up in all directions; shells were screaming and roaring as they exploded, and wherever one looked crowds of people were to be seen rushing along the street carrying the possessions they had managed to secure wrapped up in sheets and slung over their shoulders.

Little children clung to their mothers' skirts crying and screaming, while the mothers were distracted. Old men and old women, feeble and infirm, were trying to keep up with the others, but hundreds had to fall behind. Most of them were making for the Dutch frontier. My brother and myself hastened on in that direction, and near the frontier I found my wife.

All the way along people were saying that the Germans were coming in our direction, but we decided to risk meeting them. Many, however, sat down on the roadside, tired and hungry. After a long tramp we had a rest, and then started our journey through Flanders on foot. On the way we passed thousands of others. Some had no hats; many of the women were carrying their boots, which had begun to blister their feet, and they were walking over the hard roads bare-footed and sore-footed. All were trying to comfort the others. Ultimately we got to Calloo, where we had our first night's rest, sleeping in a stable on potato sacks that were wet and muddy. But we slept.

The next day we started for Hulst, a distance of 30 miles, where we passed the night on chairs in a cafe. Next day we reached Walsoorden, and then got to Hantweert by boat, walked to Vlake, and took the railway to Middelburg, where we remained four or five days. Here the people gave us a good reception, and did all they could for our comfort. We then crossed the Channel to Tilbury, were taken to London, and were put up at the Hotel Cecil.

I had been able to bring a little money with me, and paid for my food in London; but there were thousands who had been unable to get anything. Many had been out of work since the war commenced, and had no money at all. In the end I got to Bridgend, where Mr. and Mrs. Laurence have treated us as one of themselves. We are happy as we could be, but of course we would be happier if we could be in our own country again. You see there is nothing for us to do. We don't know how to spend the time. 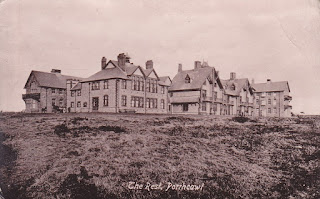 
One last impression of that terrible journey. It was terrible, and I could tell you better in my own language of the horrors of those days; of fathers wheeling perambulators, bearing all their worldly possessions, of children hanging on the parents' necks being carried to safety, of tear-stained faces of mothers, grandmothers and grandfathers; of little children in carts being drawn by dogs and mules, all crowding the roads that led to safety.

Over M. Hont's face there occasionally came a look of pain, but he tried to smile and maintain that spirit that has made the Belgian nation the pride of the world today."

For the remainder of October 1914 and the entire month of November Jacques De Hont provided a short piece to The Glamorgan Gazette, in which he addressed the local Belgian refugees in Dutch. The section was called 'Vluchtelingen'. This feature reoccurs among other local newspapers in Britain, but so far is the only Welsh one for Dutch. In January and July 1915,  The Barmouth and County Advertiser and District Weekly News published a French letter by a Belgian réfugié, not a regular item nor a proper segment, but perhaps a sign that Francophone and/or bilingual Belgians were based more in North Wales and Flemish speaking ones in South Wales?

Still, try and imagine a regular section in local newspapers today that is written in Kurdish or Levantine.
Posted by Christophe Declercq at 14:31