Mystery to be Revealed at Laugharne Graveyard

The mysterious story of a century-old Belgian refugee's grave will be revealed at a commemoration ceremony at StMartin's Church, Laugharne, 20th January 2018, at 2pm. The grave, near the main church door, has intrigued churchgoers and visitors for decades and is marked by a simple wooden cross with the words ‘Leonie Sohy Demoulin’ and ‘A Notre Mère, Regrettée’. Older residents remember that there was also a photograph of a woman and some everlasting violets but these have long disappeared. On Saturday at the graveyard, which also hosts the remains of poet Dylan Thomas, dignitaries from as far afield as Belgium will celebrate a new cross and the uncovering of the story of Leonie and her companions. 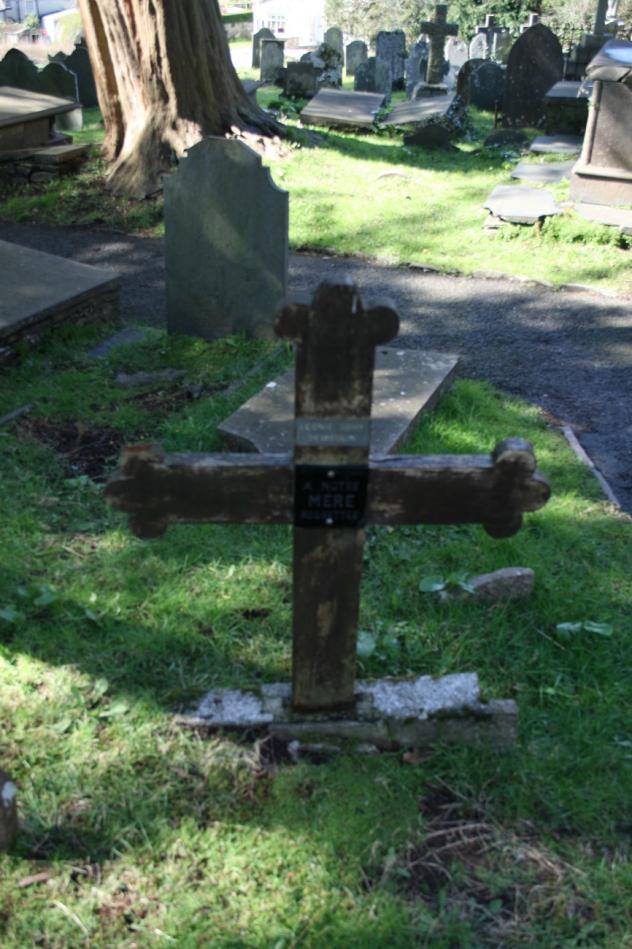 Local historian, Janet Bradshaw, who has been researching the story said: "I was fascinated yet also saddened at the thought that this ‘French woman’, as some said she was, had died so far from home. Had she been washed ashore from a stricken ship as others before her, or maybe come to Laugharne as a servant to one of the local gentry? And what about her children? I was determined to find out.”
By sending for her death certificate and checking the parish burial records, Janet discovered that Madame Demoulin was in fact Belgian, had lived with her husband at The Grist, Laugharne, and had died of a heart condition on January 17th 1916, age 58. Her home address was given as Berchem, a suburb of the port city of Antwerp, and her funeral was conducted by Father Xavier, a Belgian priest based at Milford Haven. This was the first indication that Leonie had probably been a wartime refugee and that the people of Laugharne, like many other Welsh communities, had hosted some of the thousands of Belgians who fled the devastation in their homeland when Germany invaded in 1914. Janet Bradshaw added: "I kept thinking about poor Monsieur Demoulin having to cope with the death of his wife apparently alone and being left behind in a strange country yet frustratingly I could find no further details of their story.”

But then there was a breakthrough. It transpired that a fellow history society member, Peter Stopp, while interviewing retired teacher Rosemary Rees, had learned that Rosemary's grandfather had been heavily involved in the Laugharne Belgian Refugee Committee and had had photographs of several members of the two families who came to Laugharne, which had been passed on to his granddaughter. Added to this information were some notes from the Laugharne Refugee Committee in old copies of "The Welshman" at Carmarthen library and this was enough to piece together an outline story of the Belgians who came to Laugharne.

Attending the commemoration will be the lead academic on WW1's Belgian refugees in Britain, Dr Christophe Declercq (KU Leuven, Brussels campus, and UCL London), who has also worked on the subject with Wales for Peace; he said: “Alongside the commemoration, Janet Bradshaw’s work also deserves to be celebrated because here we have another piece in the jigsaw of the story of around 250,000 Belgian refugees who were welcomed to Britain during WW1. And quite a unique story too. Evidence suggests a particular warm welcome in Wales and a sense of community in hosting the newcomers. A century later, the dedication of Janet Bradshaw and her community to uncover the story of Leonie, the Belgian refugee who was left behind, is an echo of the welcome provided a century ago, as well as testimony to Laugharne’s initiative to uncover its hidden history. I hope other communities and historians will be inspired by their example and, if they uncover any Belgian refugee stories, will contact me at christophe.declercq@kuleuven.be or c.declercq@ucl.ac.uk, with their findings.”

Altogether, in Laugharne, there were twelve Belgian refugees, including two families, most of whom arrived in December 1914. There was Florent Vandervoort, his wife and children, Edmond and Louisa; Michel and Leonie Demoulin, their daughter in law, and young grandson, René; and two single women, Mlles Goormans and Couynans, who may have been relatives of Madame Demoulin. The Vandervoort family left Laugharne for Hertfordshire, in late 1915 before Leonie Demoulin died. However, her husband still had his daughter in law and small grandson, René, and some old friends to support him, so he was not alone.  A few months after Madame Demoulin's death in 1916, only two Belgians remained in Laugharne, the younger Madame Demoulin (name unknown) and her son. Some moved away to work, the two single women returned to Belgium to be married and the fate of Monsieur Demoulin is unknown, except that he left Laugharne shortly after the funeral. The younger Madame Demoulin and her son did not return to Belgium until March 1919 but so far little has been discovered about their daily lives in Laugharne or how they readjusted to life after the war. It is known that ‘little René’ joined the Belgian army in the mid 1930s because Rosemary has a photograph of him in uniform. 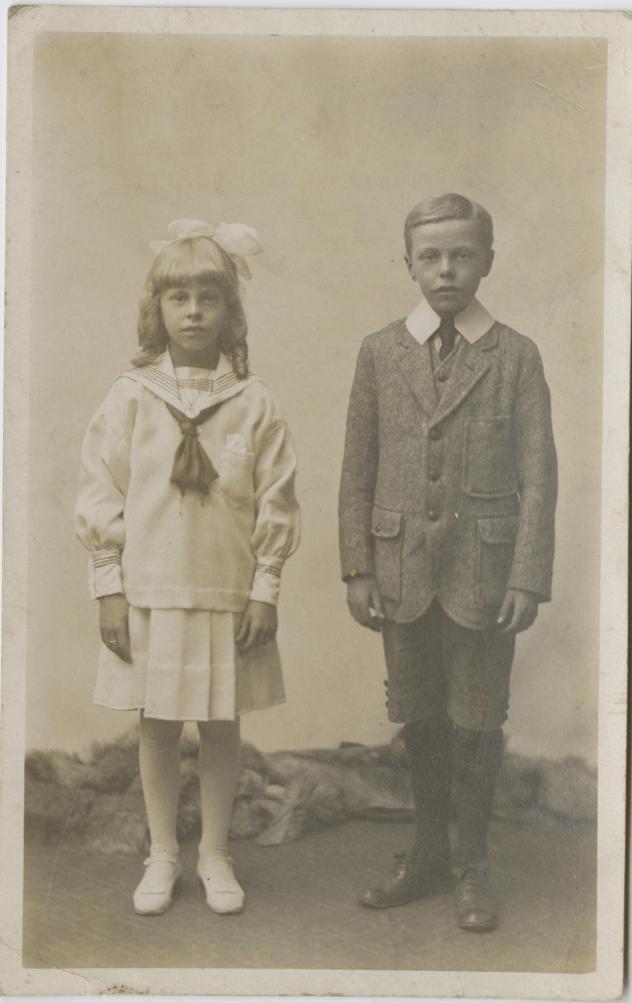 Unfortunately, Madame Demoulin's cross became very decayed but, thanks to the generosity of local craftspeople who all donated their time, skills and materials, a replacement will be dedicated by Father Christopher Lewis-Jenkins, priest in charge at St Martin's, on the 20th of January 2018.  One person who will be at the service is Rosemary Rees. "I am so glad that this has been done", she said "because my grandparents spoke so fondly of the Demoulin family and kept in touch with them for many years. In 1921 my grandfather, Samuel Thomas, even visited them in Belgium and viewed the battlefields.” Unfortunately there will be no living relatives of the Demoulin family present because attempts to find descendants by contacting Antwerp libraries and the History Society at Berchem have so far drawn a blank. However, members of the Deschoolmeester family, whose ancestors came to Carmarthenshire from Ostend and later settled in the area will be there to help mark this virtually unknown aspect of Laugharne's history. 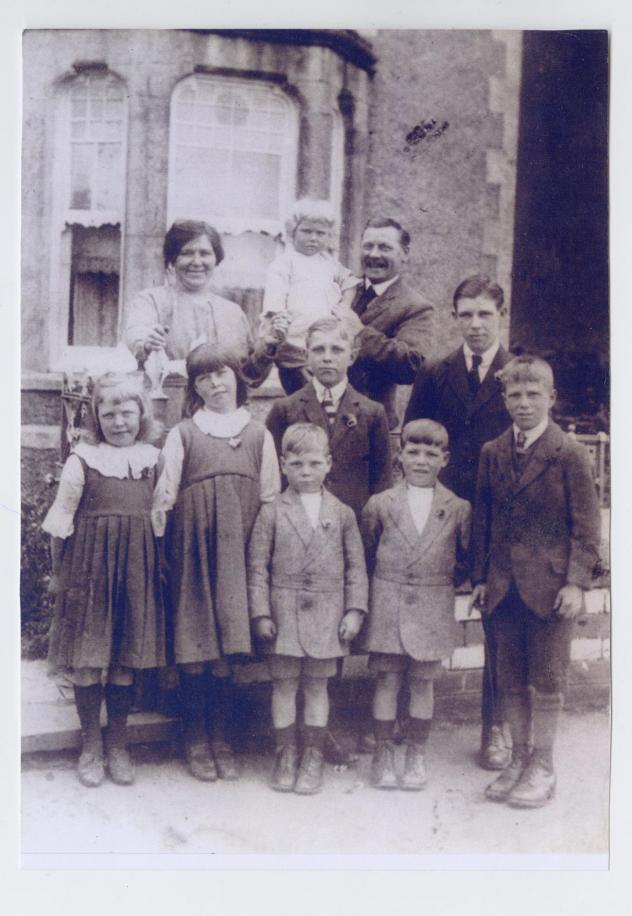 Janet Bradshaw added: “Researching this history has been very rewarding, especially getting to uncover the story and seeing the mobilisation of the community to place a new cross on her grave. I’m sure Leonie Demoulin would be proud of us, but I’m sure that she, like I, would still have that lingering hope that one day we discover whether she has any descendants who could come and visit her final resting place at Laugharne.”

Thanks to a HLF grant, a book on Laugharne in The Great War will be published by the Talacharn Community History Group (Cymdeithas Hanes Talacharn) in late 2018. This will include a chapter on Belgian Refugees in Laugharne.
Posted by Christophe Declercq at 09:47